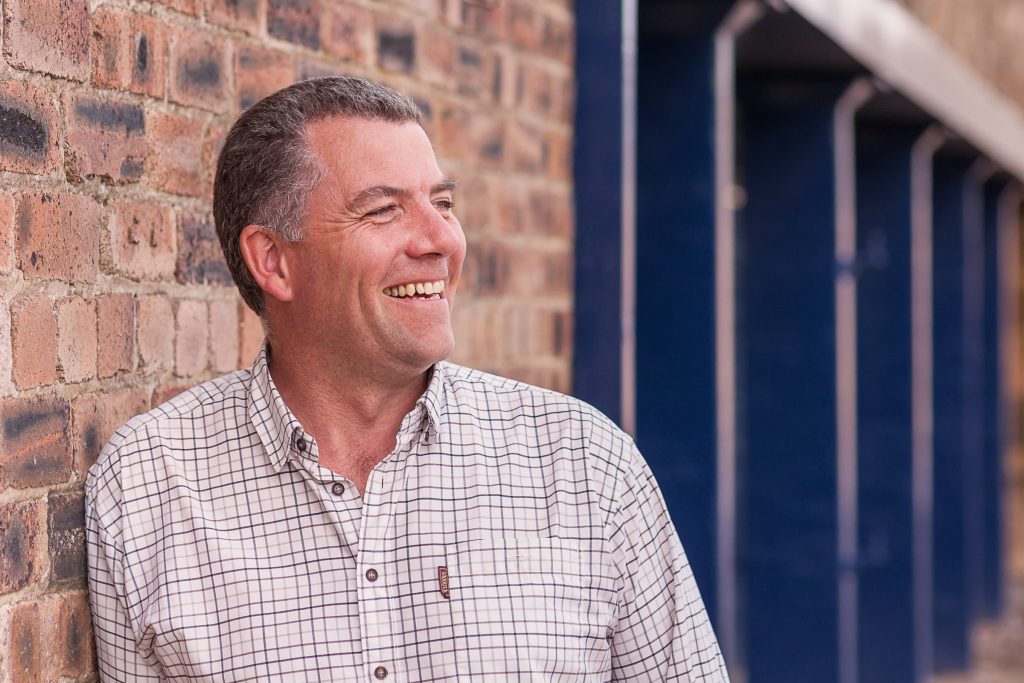 Well, ArdMoor was founded in 2010. The original concept was to become a one stop shop for all things outdoors, initially with a focus on shooting. We then moved on to stalking, a little bit of fishing kit, and then more laterly, equestrian and sailing. We’ve now got plans for adding more activities to the site and broadening the product range. It’s been fantastic growth, then last year, when we went into lockdown, we all thought the world was going to come to an end and ran around like Chicken Licken thinking the sky was going to fall in. There was that initial period of uncertainty when people drew their horns in and just didn’t know what was going on. Then, when the prime minister said, actually, you know what, you can get outside and walk for more than a mile, things all took off for us because that was the only thing anyone could do, and lots of people who hadn’t really taken advantage of the Great British countryside went out and explored it.

So sales of our welly boots and general walking kit just took off. So in one sense we’ve actually benefitted from covid. Not that anyone wants a third lockdown, but that snow in January was a godsend for us. There were a lot of people in Edinburgh, indeed in most cities, whose only activity, the only thing that they were able to do, was going for a walk on the pavements. When the snow came, they needed wellies.

It sounds like you were one of the few businesses that actually did thrive during lockdown. Were your systems prepped for that?

‘Oh no, we were very much caught unawares, just like everybody else. It was then a case of right, how are we going to pull through this. We furloughed people and cut everything back to the bare minimum. The initial call was that this was going to last three weeks, but we knew immediately that it would be three months minimum. And then it rumbled on.

‘That first four weeks I was packing boxes with a son who was home in the same bubble, with other people working from home answering the phones. It did go very quiet and you did think “my God, here we go, what’s going to happen?” But then everyone realised that actually we can get outside and we can get to the beach, and we were able to travel a little outside our immediate environments. One hates to see any businesses suffering; all the normal shops were closed and people were forced to go online to buy their kit. Not all of our customers are people who shoot, they’re farmers, farm workers, trades people and so on. For them life still went on; the sheep were still going to lamb and farmers still needed wet weather kit to go and do the lambing in so a big swathe of our customers were having to carry on as normal because that’s their livelihoods.’

So were you brought up in a shooting, hunting, fishing family or was this something you started exploring later on?

‘I was born and brought up on the land, farming stock. Went off and became a chartered surveyor to start with, stopped that, worked for a marquee hire company in Yorkshire for about 16 years and helped build that up with a couple of other guys to become one of the biggest privately owned tent companies in the UK. I then got sick of events and basically moved back to my home country. I took over the family farm, and realised that that was too small to be properly viable in today’s agricultural environment. I was writing cheques out to a middle man, every time I got paid it got paid by a middle man, and I thought what the hell do all these guys do to earn their money. I suppose that was the original seed for ArdMoor; finding a more direct route both for buying stuff I needed on the farm, but also potentially for cutting out the middle men when selling stuff that I produced on the farm. At first just trying to maximise margins. Remember the horsemeat scandal? I think there were seven steps between producer and end user. Meat was getting shipped all over Europe, getting a label added and a bit of polystyrene put underneath it.

‘And like a lot of others I wondered why that wasn’t being done locally. It’s not just about reducing food miles, although that’s massively important. We’re firm believers that we should be eating locally and that we should all eat in season. In my youth the thought of getting a strawberry in January was absurd. Now everything is available all year round, shipped from around the world, and the food miles that get added on as a result are ridiculous.

ArdMoor started as a response to that need to have a more direct route to product, but having launched it I did some market research and discovered that the average age of a farmer in the UK is 58. We’re quite a traditional bunch; I was buying blue bits for my blue tractors from the same guy that sold my grandfather blue bits for his blue tractors. And I realised that this was both a problem and an opportunity. Farmers might not be shopping around on google each time they need something, but once they’ve found a reliable supplier they’ll stick with them.

‘So I decided to focus on clothing and footwear, because farmers do buy that online particularly those who are more remote. And it worked, we became their first port of call, and when that took off we had another change of tack. Let’s focus on kit and clothing and all the accessories that go along with having a great time outdoors, whether that’s shooting, stalking or bagging a Monroe. The aim was to get to the point where people think “I’m going to do something outdoors, so I’m going to have a look at ArdMoor, because they’ll have the right kit for me.”’

Going back to the food side of things, what do you think is the biggest challenge for people to not be eating game?

‘I think it’s probably down to availability. You sometimes see venison in the supermarket, but not often and not much of it. You very rarely see any other sort of game. I think there’s this this continued aversion towards eating game that has been shot as opposed to eating pork that’s been butchered in an abattoir. People are very happy eating the latter but not the former.  There’s an association in the public mind with toffs having a whole lot of fun shooting lots of animals. Birds are killed for sport, and you don’t necessarily have to be a killjoy to find that distasteful. But for as long as shooting continues the end result is fantastic produce.

‘Of course, there’s a growing number who use their local butcher to buy local produce that’s not been mass produced. The message is getting through that, whether it’s organic vegetables or locally grown meat, you can taste the difference and it’s worth paying that little bit extra. But people who are shopping on a budget will always go to Aldi or Tesco and buy their food from there. As an industry we could do more to try and get the food into the supermarket, which I know the British Game Alliance is doing. And make sure we’re giving people the right cooking instructions to help them decide to try it. I think the other issue is that people generally don’t know quite what to do with it. This goes back to the idea of game being exclusive.’

Well, while we’re on the topic of food (and serious stuff aside), can you tell me what is on your last supper menu and who is cooking it?

‘My last supper would be roast haunch of venison with a redcurrant-peppercorn sauce, cooked by the wife of a guy I used to work as a stalker for on an estate up north in the summer. She cooked the most delicious venison. That’s pretty much all we ate actually, venison for breakfast, lunch, and supper. And then it was put through the mincers for our sandwiches the next day. Amazing.

Sounds like we’ll have to get in touch with her so we can feature her in the next issue of Talking Game. Get those recipes lined up! 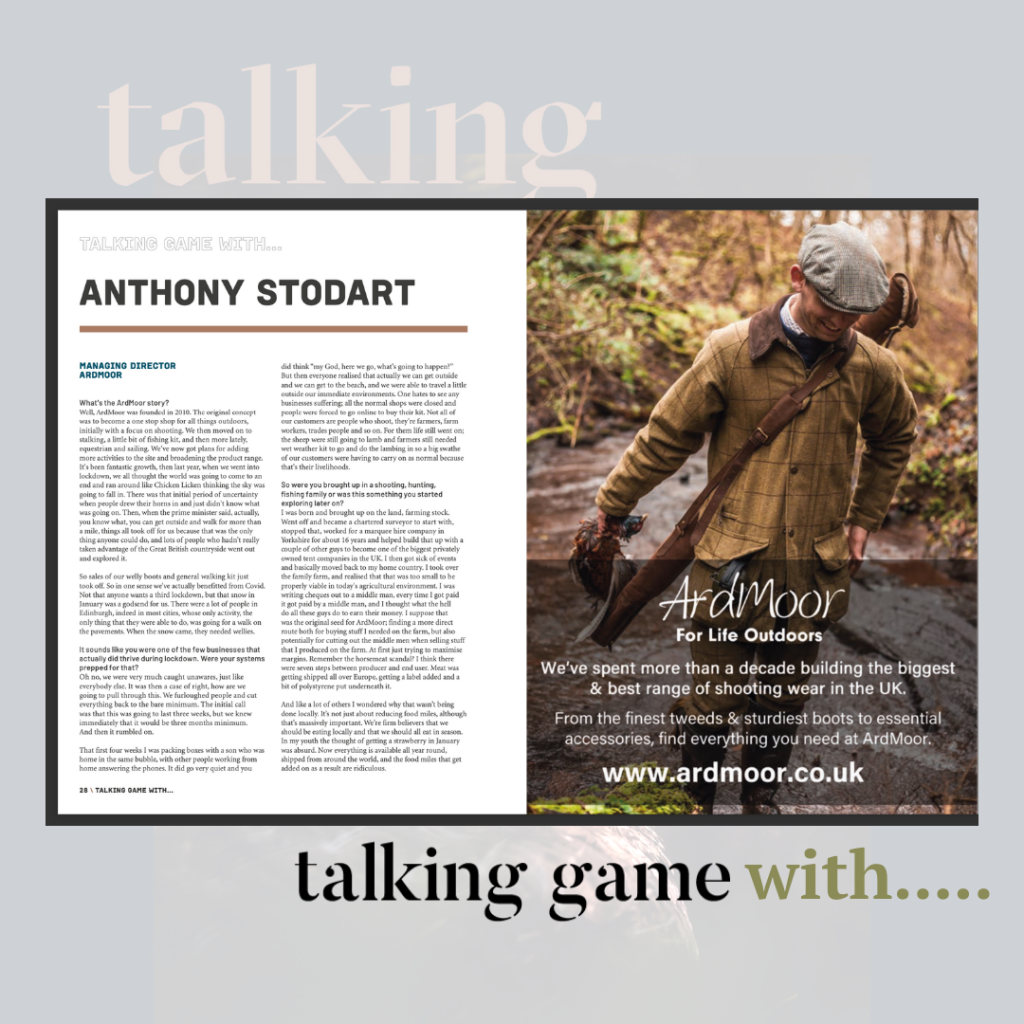