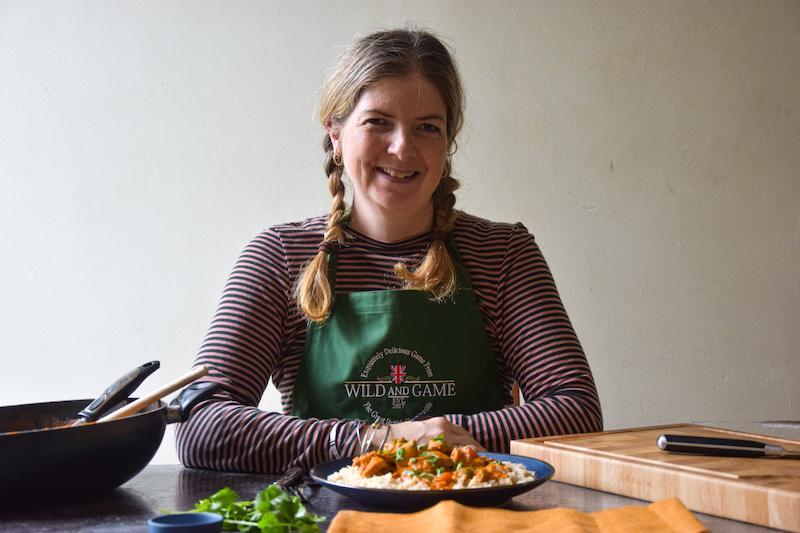 Jen White is a Swansea-based food writer who started out as a restaurant reviewer before also training as a chef, which led to writing recipes for various magazines and newspapers. For the past couple of years, she has had a special interest in cooking game, which led her to write game recipes for Wild and Game’s website and for various game-focused publications. Wild and Game’s objective is making game more accessible and boosting the market for game in the UK, so Jen’s focus is on coming up with recipes that are easy to cook and that ignite enthusiasm for cooking with game on a regular basis.

I decided to get some training after first becoming a restaurant reviewer; I wanted to deepen my technical understanding of cooking, and it worked a treat – and also led to me writing recipes for various magazines, and, more recently, for Wild and Game.

In recent years I’ve discovered a deep passion for game. It’s so under-used in the UK but is one of our finest ingredients. My favourite way to spend a day is writing down ideas then trying them out in the kitchen and photographing the results.

There’s nothing I dislike really, but I would love someone to tidy up after my mammoth cooking sessions!

I used to favour partridge but as my taste for game has developed, I have become passionate about grouse. It’s such a characterful meat, and cooked right it is beautifully succulent and tender. I love pot roasting whole birds, but I’m also a big fan of Wild and Game’s grouse breast fillets, especially wrapped in pancetta, pan-fried and served with a rich, fruity sauce.

It depends on what type of game you are cooking. With pheasant and partridge, it’s a great idea to brine the meat first overnight – it really does give you a more succulent and tender finished result. If you are pan-frying breasts of birds or using them in something like a curry, you need to avoid over-cooking them. If you’re adding them to a sauce, put them in at the end and serve the dish as soon as they have cooked through – usually only a matter of minutes. With wild boar or venison, the way you should cook it very much depends on the cut but if you have tenderloin, for example, again the trick is not to over-do it.

What game in particular benefits from hanging?

A day or two’s hanging is great for pheasants. It’s a similar story for venison – a couple of days is great.

You are cooking for a dinner party at home with game as the primary ingredient, what would you serve for starters and mains?

Grouse breasts wrapped in pancetta, pan fried and served with a blackberry sauce, followed by pot roasted partridges in a cider, apple and cream sauce with seasonal vegetables.

Is there a particular game dish you serve regularly?

The favourites in my home kitchen are venison bobotie, venison lasagne, pheasant or partridge mafé (a West African curry with a peanut butter sauce) and any pot roasted birds served with roasted vegetables.

It’s the depth of flavour that really sets it apart. It’s also a leaner, healthier option than most of the meats you’ll normally see in the supermarket.

Wild and Game’s approach is to create game versions of popular pies, pasties, ready meals, sausages and other dishes that people already know and love – so we have a game spin on a Cornish pasty, a game version of a pork pie, game curries and wonderful game patés. The approach is working: people start by buying these ready-made items then graduate to cooking with game themselves. We provide recipes on our website and on our monthly newsletter, as well as cooking tips to help people feel confident cooking game.

The worst one was a pheasant stew, served in the first and worst pub I have ever visited as a restaurant reviewer. It was dry, stringy and chewy – not the best introduction to game. The best was probably melt-in-the-mouth venison with venison Bolognese and a liquorice sauce in Le Champignon Sauvage in Cheltenham. Divine. It was years ago but it still sticks in my mind.

I haven’t yet found one I don’t enjoy when cooked properly. //