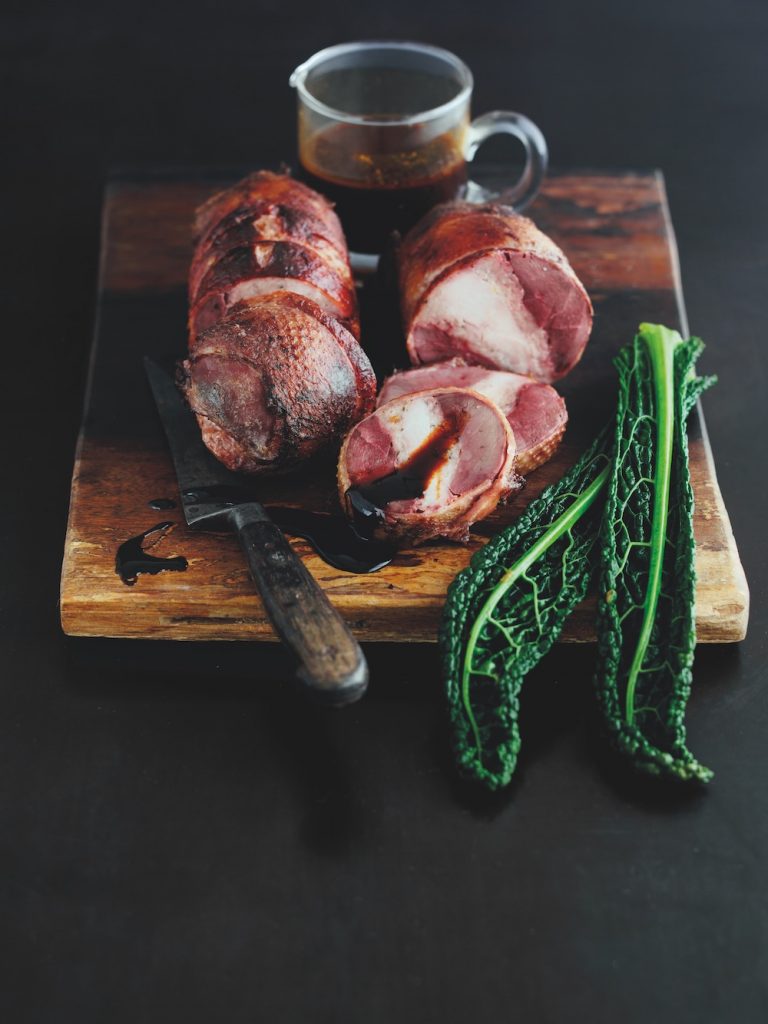 Photo by Steve Lee, from Venison: The Game Larder

A few years ago I was asked to come up with a three bird roast recipe. I often think that three, four, five bird roasts come out dry and over-cooked, so I looked for a different way of doing things. We have had this dish on our Christmas menu in the Escoffier Restaurant at Westminster Kingsway college a few times and customers love it. In essence what we are doing is cooking the three birds breast on breast, adding a good quality sausage meat to give moisture, and basting the meat as it cooks. The duck skin renders down and bastes the meat but it also gives that crispy duck skin texture to the dish. Just take your time colouring it up in the pan and rendering the fat down. If you want, add other ingredients to the sausage meat such as nuts, more herbs, or dried fruit to give it a different look and taste.

Skin and remove the breast fillets from the pheasant and the pigeon. Remove the wishbone from the duck. Starting from the backbone, skin the duck completely so that you remove the skin in one piece. Remove the duck breasts from the skinned duck carcass.

Repeat the process with another 50g of the sausage meat, laying the rolled sausage meat on the pheasant breast with pigeon breasts on top. Roll out the final 50g of sausage meat and complete with the second duck breast.

Wrap the duck skin around the breasts and sausage meat, overlapping the skin where it meets by at least 2cm so that the breasts and sausage meat are fully enclosed. Tie the parcel three times with butcher’s string, around the middle and once either side; not too tightly or the sausage meat will be pushed out during cooking. Wrap the parcel firmly in ten layers of cling film, leaving enough extra at each end to be tied. Twist the ends and tie as tightly as possible at each end like a Christmas cracker.

Simmer the parcel in salted water for 20 minutes, then take out, cut one end of the cling film, and place at an angle for 5 to 10 minutes to allow any liquid to drain out: this will create a vacuum that will pull the joint together. Take off the cling film, pat dry, and place in a cold frying pan.

Put the cold pan on a medium hob. As it heats, the duck fat will render down and colour the skin. Turn frequently so the skin colours and crisps evenly, then roast in the oven with the overlap down at 180°C for 15 minutes, basting every now and then.

Allow to rest uncovered somewhere warm for 10 minutes, then remove the string, trim the ends, and slice, allowing 2 slices per person. Serve with a game jus or gravy.