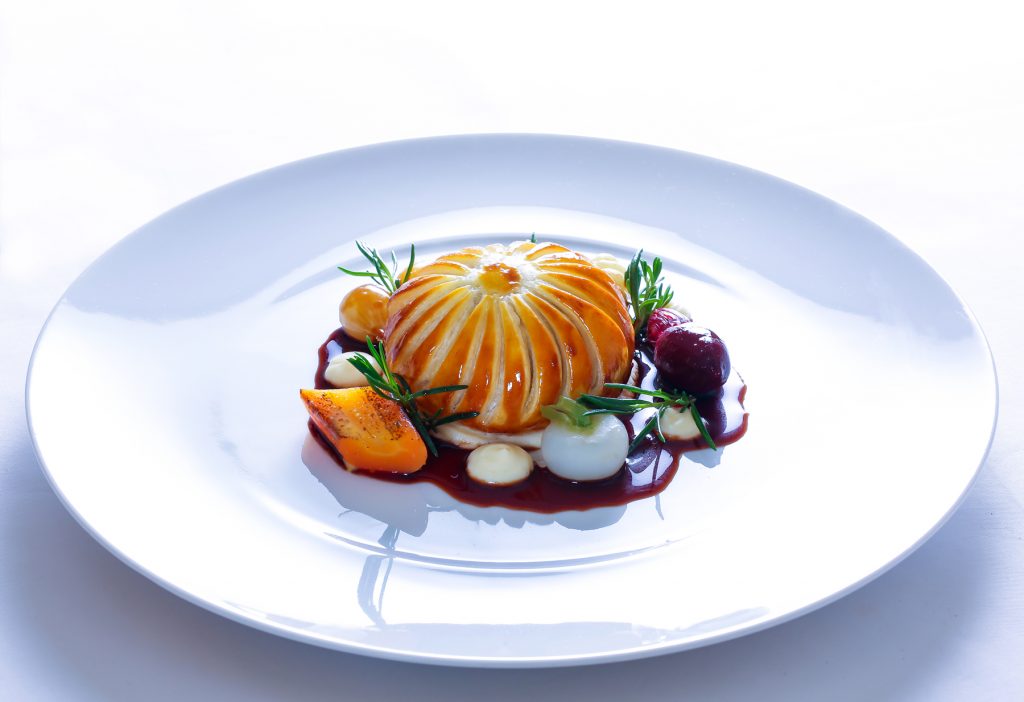 To start your Pheasant Pithivier remove the pheasant legs and place to one side. Remove the skin from the breasts and trim the narrow ends so that they will cook evenly; retain the trimmings for the farce.

Soak the raisins in the jasmine tea for 30 minutes. Fry the shallots, pine nuts, soaked raisins and tarragon for 2 minutes in a little vegetable oil and butter. Leave to cool. Take 2 breasts and all the trimmings and thigh meat and blend with the whole eggs until smooth, slowly pouring in the vegetable oil. Place the mix into a bowl and stir in the raisins, pine nuts, tarragon and shallots. Season with salt, pepper and the armagnac.

For each pithivier, place lightly oiled cling film inside the mould, allowing enough cling film to hang over the sides. Use 2 tablespoons of the mixture to line the sides of the mould. Place one breast of pheasant in the centre of the mould and cover with more of the mixture. Press down firmly, wrap around the overhanging cling film, and turn out. Re-line your mould with the puff pastry, allowing plenty to hang over the rim of the mould. Remove the cling film from the pheasant domes and place inside the pastry. Cover the top with pastry and chill for 30 minutes, then turn out onto a baking sheet. Wash the pastry with the beaten egg.

To decorate, hold the pithivier in the palm of your hand and, starting almost at the top of the dome, make curved incisions through the pastry almost to the base, turning the pie after each cut until it is scored all the way round. The pithivier will keep uncooked in the fridge for two days, while the flavours improve.

To make the sauce, fry the pheasant drumsticks and chopped carcases in a hot pan with garlic and thyme until golden. Sprinkle over the cornflour, cook for 1 minute, then add the red wine. Boil for 2 minutes, then add the stock and bring to the boil. Simmer for ¾ hour, then strain and reduce until the sauce coats the back of the spoon. Adjust the flavour with a little honey, lemon juice, and salt and pepper.

Cook the pithiviers for 20-25 minutes at 200˚C until golden brown. Rest for a few minutes and serve on a mound of cabbage with root vegetables, drizzled with the sauce.