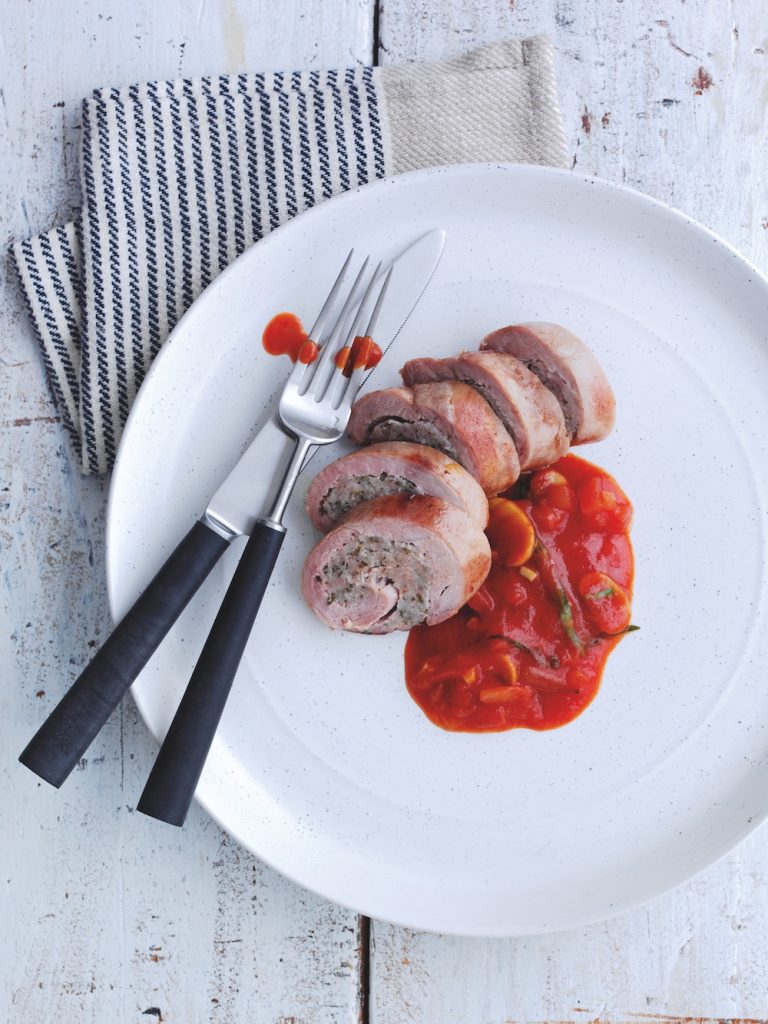 Prepare the Pheasant Roulades sauce a day in advance for the optimum flavour. Sweat off the onion and garlic in 10g of butter until soft, then add the white wine and reduce by two-thirds. Add and cook the mushrooms for a further 2-3 minutes until done, then add the tomato purée. After 5 minutes pour in the warmed stock and reduce by half. Add the passata and season to taste. Pick the leaves from the tarragon stalks and add the stalks to the pan, simmering for 15 minutes. Finally, remove the tarragon stalks and replace with the leaves.

Butterfly and slightly bat out the pheasant breasts. Mix the sausage meat with the chives and sage, season, and divide the mix into six 20g balls. Place each ball between two sheets of cling film and roll out to the same size and equal thickness as the pheasant breasts. Take off the cling film and place the mix on top of each breast, then roll each breast into a roulade.

Lay out five overlapping slices of pancetta on six pieces of cling film, each three times the length of a roulade. Place the roulades on top and wrap the pancetta around. Placing the wrapped roulades on the edge of the cling film roll them tightly in the film, then twist the ends and seal firmly with string.

If prepared in advance, warm the sauce.

Simmer the roulades in boiling water for 15 minutes, then snip off one end of the cling film and allow to rest at an angle for 6 to 8 minutes: any liquid that comes out can be added to the sauce. Once cool remove the remaining cling film, pat dry with kitchen paper, and fry in a little oil and the remaining butter, seasoning and basting to colour. Once coloured, slice and serve with the sauce.