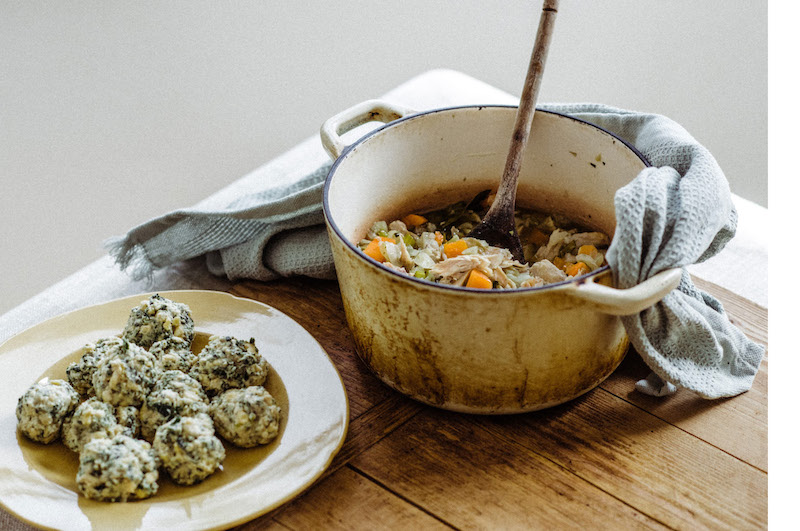 Maybe it’s no surprise, but game meat works brilliantly with other wild or foraged ingredients. What grows together goes together, after all. Bring out the delicate flavour of rabbit by pairing it with iron-rich nettles for an authentic taste of the field and hedgerow. Nettles are best gathered early in the growing season – choose the vibrant new leaves for the best flavour and tenderness. As soon as they’re plunged in boiling water, nettles lose their evil sting and can be used as you would spinach. After blanching, they need a really good squeeze to get rid of their liquid.

Start by making the stew. Mix the plain flour, mustard powder and a pinch each of salt and pepper in a large bowl. Toss in the jointed rabbit pieces until they’re well covered with flour, giving them a tap to knock off any excess. Heat a heavy casserole dish on the hob, drizzling in a splash of oil once it’s hot. Sear the rabbit a few pieces at a time, taking care not to cram too much into the pot at once. When it’s all browned, set aside.

In the same pan, sweat the fennel, onion, celery and carrot until soft, then throw in the garlic, bay leaves and tarragon. Return the rabbit to the pan and add the hot stock and the grainy mustard, stirring it through gently.

Cover the pan and either simmer on the hob over a low heat or put it into the oven at 180°C. The rabbit will be very tender in about an hour and a quarter.

While the rabbit cooks, make the dumplings. Stir together the flour, suet and a pinch of salt. Squeeze any excess liquid from the nettles and chop them finely before adding them to the flour mixture. Add cold water a trickle at a time and, using your hand, bring the flour and nettles together into a soft dough. Divide into 8 pieces, roll into balls and set aside to rest for a few minutes.

Take the rabbit pieces out of the stewing liquid and carefully remove the bones. You might want to use some tongs unless you have asbestos fingers. Taste and season the stock and return the meat to the pot. Bring the stew back to a gentle bubble on the hob before dropping in the dumplings and brushing the tops with the beaten egg.

Put the covered dish into the oven and cook for 20 minutes, then remove the lid and cook for a further 15 minutes to brown and crisp the dumplings.