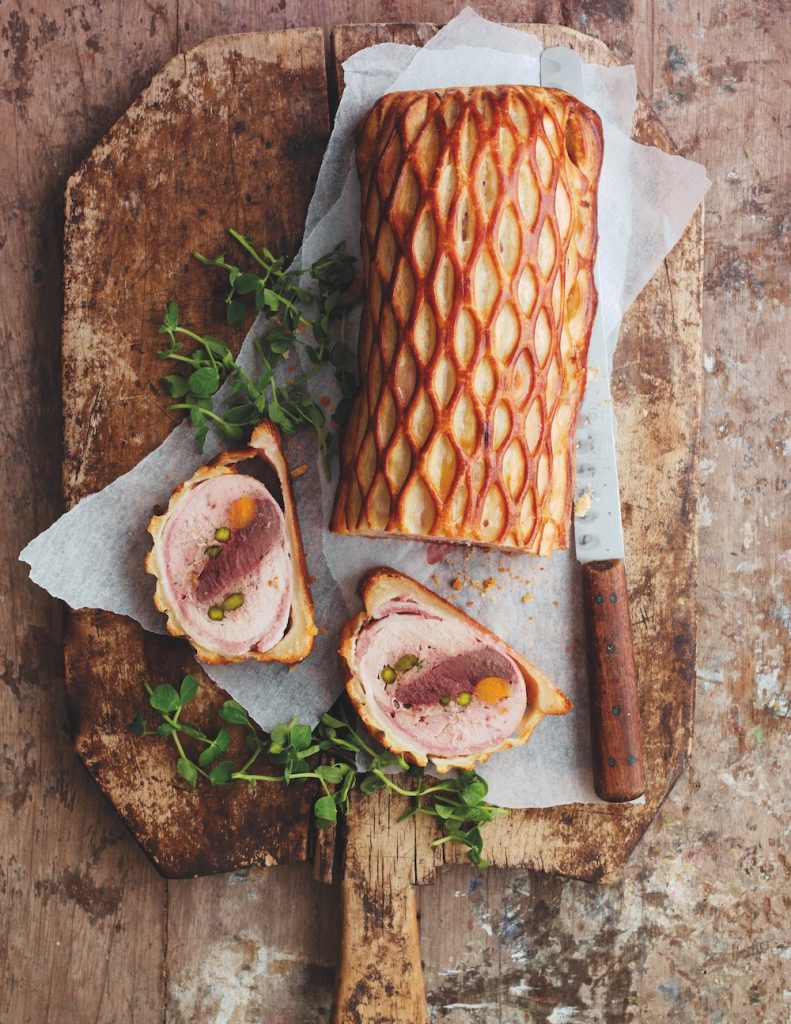 Lay overlapping bacon slices in the middle of a large sheet of cling film. Beginning at the edge of the bacon, lay the three pheasant breasts across the slices. Divide the sausage meat in two and roll out each half between two sheets of cling film to the same size as the three breasts. Lay one portion over the pheasant and sprinkle with pistachios and apricots. Lay four pigeon breasts on top, followed by the second piece of sausage meat and more pistachios and apricots. Top with the partridge breasts.

Wrap the bacon around the breasts and wrap tightly in the cling film. Twist the ends of the film to seal and place in the fridge for 20 minutes.

Roll out a piece of puff pastry on another piece of cling film to 4mm. It needs to be 2cm longer and about 5cm wider than the wrapped meat.

Brush a little water over the edges of the pastry to help it seal. Remove the wrapped meat from its cling film and place it at the bottom edge of the pastry.

Roll the meat in the pastry and seal on both sides. Remove the cling film from the pastry and pierce any air pockets. Lay the joint on a well-greased tray with the seal on the bottom and brush the top with egg wash. Roll the rest of the puff pastry to 3mm thickness, then roll a lattice cutter along it. Place this over the top of the joint, trim off any excess, and egg wash.

Finally, make three small holes at the base, along each side of the joint, to allow any juices to escape. Place into a pre-heated oven at 180˚C for 30 minutes, then turn up to 200˚C for a further 15 minutes. Allow to rest for 10 minutes before serving.