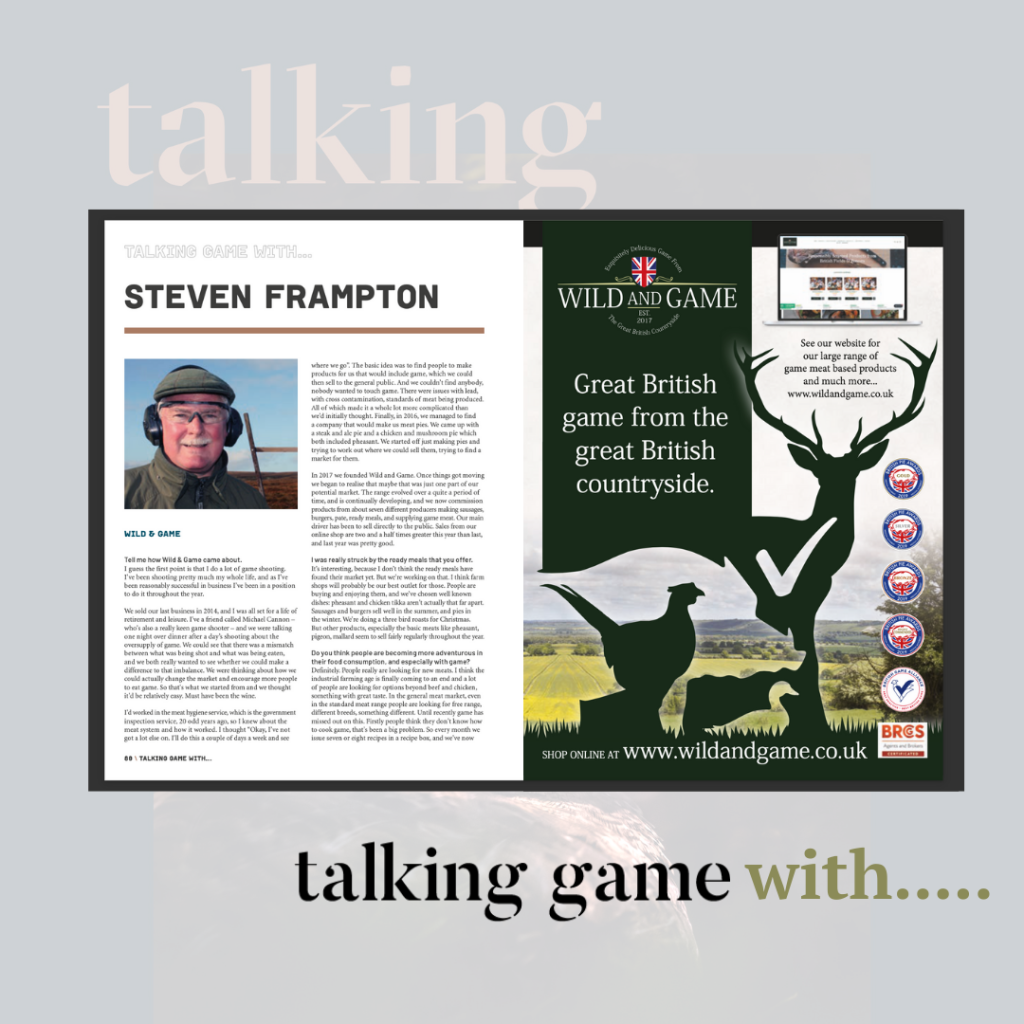 Tell me how Wild & Game come about.

I guess the first point is that I do a lot of game shooting. I’ve been shooting pretty much my whole life, and as I’ve been reasonably successful in business I’ve been in a position to do it throughout the year.

We sold our last business in 2014, and I was all set for a life of retirement and leisure. I’ve a friend called Michael Cannon – who’s also a really keen game shooter – and we were talking one night over dinner after a day’s shooting about the oversupply of game. We could see that there was a mismatch between what was being shot and what was being eaten, and we both really wanted to see whether we could make a difference to that imbalance. We were thinking about how we could actually change the market and encourage more people to eat game. So that’s what we started from and we thought it’d be relatively easy. Must have been the wine.

I’d worked in the meat hygiene service, which is the government inspection service, 20 odd years ago, so I knew about the meat system and how it worked. I thought “Okay, I’ve not got a lot else on. I’ll do this a couple of days a week and see where we go”. The basic idea was to find people to make products for us that would include game, which we could then sell to the general public. And we couldn’t find anybody, nobody wanted to touch game. There were issues with lead, with cross contamination, standards of meat being produced. All of which made it a whole lot more complicated than we’d initially thought. Finally, in 2016, we managed to find a company that would make us meat pies. We came up with a steak and ale pie and a chicken and mushroom pie which both included pheasant. We started off just making pies and trying to work out where we could sell them, trying to find a market for them.

In 2017 we founded Wild and Game. Once things got moving we began to realise that maybe that was just one part of our potential market. The range evolved over a quite a period of time, and is continually developing, and we now commission products from about seven different producers making sausages, burgers, pate, ready meals, and supplying game meat. Our main driver has been to sell directly to the public. Sales from our online shop are two and a half times greater this year than last, and last year was pretty good.

I was really struck by the ready meals that you offer.

It’s interesting, because I don’t think the ready meals have found their market yet. But we’re working on that. I think farm shops will probably be our best outlet for those. People are buying and enjoying them, and we’ve chosen well known dishes: pheasant and chicken tikka aren’t actually that far apart. Sausages and burgers sell well in the summer, and pies in the winter. We’re doing a three bird roasts for Christmas. But other products, especially the basic meats like pheasant, pigeon, mallard seem to sell fairly regularly throughout the year.

Do you think people are becoming more adventurous in their food consumption, and especially with game?

Definitely. People really are looking for new meats. I think the industrial farming age is finally coming to an end and a lot of people are looking for options beyond beef and chicken, something with great taste. In the general meat market, even in the standard meat range people are looking for free range, different breeds, something different. Until recently game has missed out on this. Firstly people think they don’t know how to cook game, that’s been a big problem. So every month we issue seven or eight recipes in a recipe box, and we’ve now got hundreds of recipes on the website. That’s helping. One of the biggest things we did, which we didn’t intend to do at the start, was about 18 months ago we added venison to the range. We were amazed how many people that brought to the website, who would then try other products, move on to buy other game, because they’d already gone for that wild taste.

So yes, I now think there’s a massive interest in game at the moment. It ties in with a lot of real concerns among consumers. Game has become recognised as a healthy, sustainable resource. It’s on an impressive wave and with our ability to introduce new products we’re right at the top of it. The low carbon footprint, low food miles, is important. The element of free range and wild is also important, and the method of slaughter is an interesting issue. Many people don’t like the idea of animals going to abattoirs: we get asked so often, is your venison killed in an abattoir? And the answer’s no, it’s all wild.

Our emphasis remains on selling direct to customers, but we’re increasingly getting our meat into restaurants. We’ve got to meet some of the celebrity chefs at various events, and a number of them now come to us. Their issue was that they would love to put more game on the menu if they had a reliable source, but they couldn’t buy game when they wanted to buy it because of the seasons. Of course the last 18 months with covid had a major impact on this, but restaurants are now starting to revive again and we really are seeing a lot of interest on that side.

You said you were a keen shooter, have you always been into shooting?

My father shot a bit, a few pigeon and pheasants. I actually started shooting with my first air rifle at about seven, this and that, then moved on to pigeons at around 10 or 12. I was in the Great Britain clay shooting team for about 15 years, and was number one in the UK for a period of time. So I was shooting a lot, travelling a lot internationally for competitions. I was still a keen game shooter, but obviously it isn’t cheap so I couldn’t do as much as I’d like to have done. Since then I’ve been quite fortunate and have the opportunity to go out more often and enjoy all the experiences that come with game shooting, and all the different friends you make. I was in Finland recently shooting capercaillie with a team that I met clay shooting 34-35 years ago. Game shooting isn’t just about the shooting. It’s a way of life, and it’s been a pretty good one to be honest.

Where was your most memorable day shooting?

There have been so many it’d be hard to pin down a single day. The first capercaillie you shoot is something you’ll always remember, as is your first big stag. One thing I’ve only done once, and I’d like to do again, is hunting up in the mountains in Iceland. That was really hard; you only shot 10 birds a day and it was just one of those special experiences that I would never have enjoyed had I not been shooting.

What do you think is important to remind younger generations who are perhaps just getting into shooting?

Safety, obviously; that’s going to be a priority, and etiquette is really important. And if you’re shooting birds, you need to be eating them. Making sure that you dispatch animals or birds as soon as you can, so always go after anything that’s wounded. But it’s not all about the killing. I think that’s the key message, it’s really about the whole atmosphere of shooting; learning about the birds, learning about conservation, learning about where they live, how to find them, where you shoot them. All those things are so important.