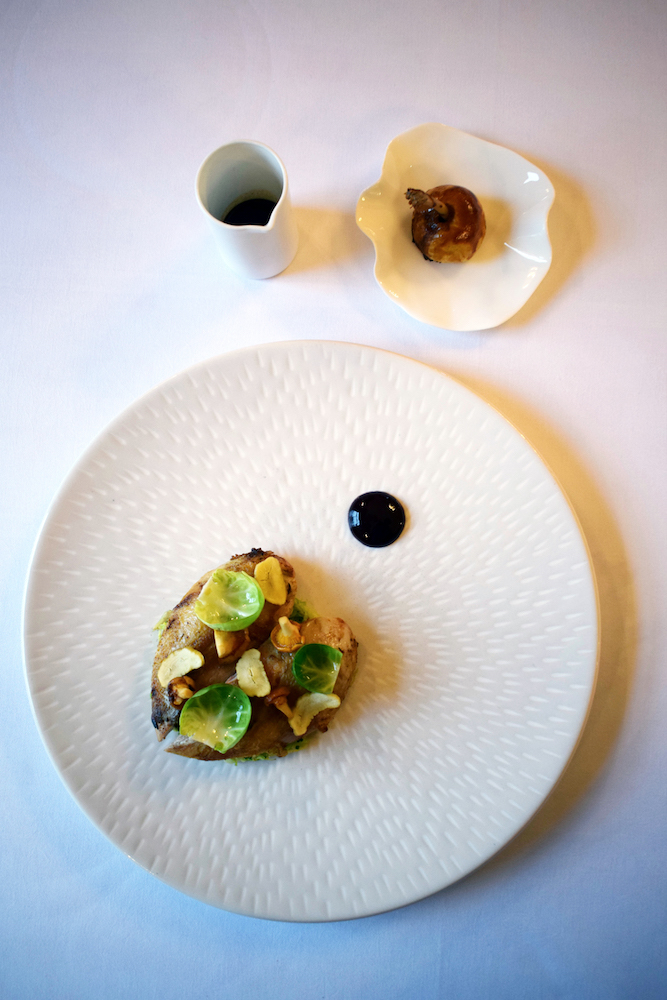 Pot Roast Partridge – For the sauce, caramelise the chopped trimmings in a little oil. Add the shallots, garlic and juniper and continue to roast until golden. Add the port, wine and liqueur and reduce by two thirds. Add the meat stock and simmer gently for 30 minutes. Pass through a fine sieve and reduce to desired sauce consistency. Finish by whisking in a small cube of unsalted butter.

The quantities given for the chutney will yield more than required, but it will keep for up to a month in a sealed jar. Combine all the ingredients and simmer gently for 30 minutes. Blend to a smooth purée, and pass through a fine sieve.

Heat the duck fat, garlic and thyme and add the partridge legs. Cook in a low oven (130˚C) for 90 minutes or until meat is easily removed from the bone. Allow to cool slightly, then remove the skin and flake the meat. Cook the diced bacon and onion in a little butter until soft, add the flaked meat, moisten with a little of the partridge sauce and adjust the seasoning. Allow to cool, then divide the mixture into 4 balls. Carefully wrap in the rolled puff pastry and brush with the beaten egg. Sprinkle with sesame seeds and cook at 200˚C for approximately 10 minutes or until golden brown.

Discard the outer leaves from the sprouts and finely shred the remainder. Melt a little butter in a pan and cook the shredded sprouts gently until tender. Cut 12 nice slices from the chestnuts and set aside; chop the remainder and add to the sprouts. Add the cream and cook until it coats the sprouts. Finish with the spring onions, chives and seasoning.

Season and brown the partridge crowns in a little oil until golden. Add butter to the pan and cook further until it begins to foam. Cook in an oven at 180˚C for 6-8 minutes, basting occasionally with the butter. Allow to rest, then carefully remove both breasts from the crown. Cook the girolle mushrooms in the partridge butter, season, and set aside.

Arrange the sprout mixture neatly on serving plates. Top with the partridge breasts and garnish with the chestnut slices, girolles and blackberry chutney. Serve the little pies and sauce separately.